Our start in unionism 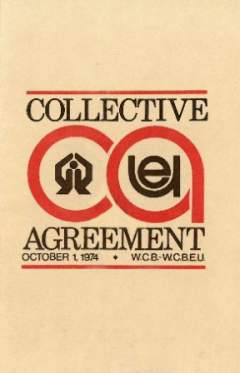 The Workmen’s Compensation Board Employees’ Union started out as an association in 1970, but in our heart, we wanted to unionize. Luckily, 1972 saw a change to a more labour friendly Barrett government and anticipating changes to the Labour Code, we started organizing our co-workers. By December 1972, over 50 percent of the potential members had signed up to unionize and we made an application to the B.C. Labour Relations Board. The request was initially rejected in 1973 as we were considered an agent of the Crown, which wasn’t permitted at that time.  Later that same year though, a new Labour Code and Bill 75 were implemented. This legislation was the change we needed and it meant we could be recognized as a union, which we knew would put us in a stronger position to improve the working conditions for our co-workers. We had an issue though, in that the Act also established there could only be three bargaining units – nurses, licensed professionals, and public service. This meant the only way WCB employees could unionize was to become part of the BCGEU (BC Government and Services Employees’ Union). Although we were happy to unionize, we also wanted to be an independent union. It took a year of appeals and a campaign for public support before the Labour Relations Board made a decision in April 1974 that the WCB was sufficiently autonomous from government to be granted status as an “employer”. Although there was initial opposition from some other unions, by April 28, 1974, they withdrew their objection and, instead, offered to help create the WCBEU. On May 23, 1974 the certification hearing was held and the rest was history. We were certified with a total of 730 members.

Our first ever round of bargaining saw demands around; extended medical, fair annual vacation scheduling, a bi-weekly pay period, a dental plan, substitution pay, and sick leave among others. Our first collective agreement, achieved in 1974, saw gains that supported substantial improvements to our member’s lives. 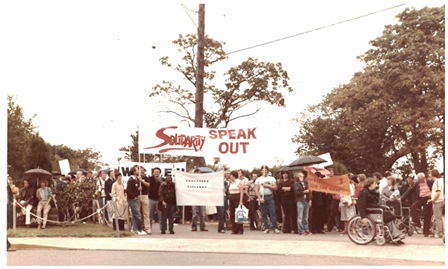 By the following year though when WCB expanded to area offices, management picked names from a hat to decide who went where instead of a fair process. The union went public over what they coined the “meat draw” and other issues, including poor working conditions, unfair treatment, and a refusal to bargain a second collective agreement. This was followed up in 1978 by a move where the WCB made a number of union jobs redundant and then posted them as excluded positions. People were not only irate but hurt. With building dissatisfaction around arbitrary treatment in performance reviews, building unrest in the labour movement as a whole (due to regressive legislation brought in by the Social Credit government) we were proud to join our labour allies in Operation Solidarity.

Unfortunately, conditions didn’t improve and in 1984 some benefits were lost in bargaining and one hundred and thirteen members were declared redundant. The Board announced closures of our Williams Lake, Fort St John, Penticton, Prince Rupert, and Chilliwack offices, reducing service to the workers in BC.

In 1988, the union did a survey that confirmed over half of the membership were working unpaid overtime to keep up with work volumes so, in 1989, when the employer presented a contract with some improvements, but that didn’t address other outstanding issues, members were adamant that they deserved better and went on strike. The strike of 1989 was our only strike to date and, following it, the members approved a dues increase of 0.25 percent to build a strike fund. We also changed our name to the Compensation Employees’ Union, losing the WCB reference. 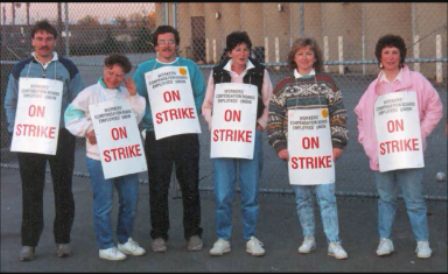 Since that time the CEU has completed many successful rounds of bargaining to improve wages, benefits, time off, and working conditions. During bargaining in 2019, we were able to attain some significant improvements to para-medicals, establish a joint workload committee, expand our work from home language, increase standby pay, attain language around flexible/compressed work schedules and attain a LOU on psychological Health & Safety, among other gains. We have seen limited wage increases as we are governed by the public sector employer’s council and therefore bound by the provincially set wage increase applicable to public sector employees.

We have come a long way since 1974 though. With almost 3000 members throughout the province we have become a much larger family. We know we are still one of the smaller unions in BC, but we are much bigger than our size. Through strong fiscal management, our defense fund has grown to a point where we can establish some security for members if we had to go out again in the future.

Along the way, in 2004, the CEU affiliated with our labour friends at the BCGEU. This gives us a strategic advantage to reach organized labour on issues that are important to our membership. It also allows us to contribute and help build and improve the lives of workers not only employed at WCB but throughout the Province, working as a collective. As an affiliate we participate in many committees at the BCGEU and BC Federation of Labour, amplifying our voices. We are also affiliated to NUPGE and the CLC which allows us to echo that voice Canada wide.

At the CEU we support and value a publicly-managed, administered, and delivered workers’ compensation system; one that respects both worker and employer rights and upholds the principles of the historic compromise. When substantial cuts were made to WCB legislation in 2002, we used our resources to start the Public Compensation Coalition to ensure everyone was aware of the cuts and the impact to workers that would result. CEU believes our members have the skills and knowledge to best support the workers in BC and want to administer a system that is fair to all, where all parties are respected and listened to.

Our members are diverse and although mostly located in the WCB main Richmond office, approximately 30% of our members work somewhere other than there. We are lawyers, nurses, cleaning staff, maintenance workers, electricians, adjudicators, clerical support, prevention officers, statisticians and IT support members to name just a few. We live in Terrace, Surrey, Prince George, Nelson and many other places throughout BC. We are workers ourselves.

Contact your representatives to find out more!
Get In Touch
© 2023 Compensation Employees’ Union , all rights reserved • Site Map • By Line49 Design, Vancouver BC
Back To Top