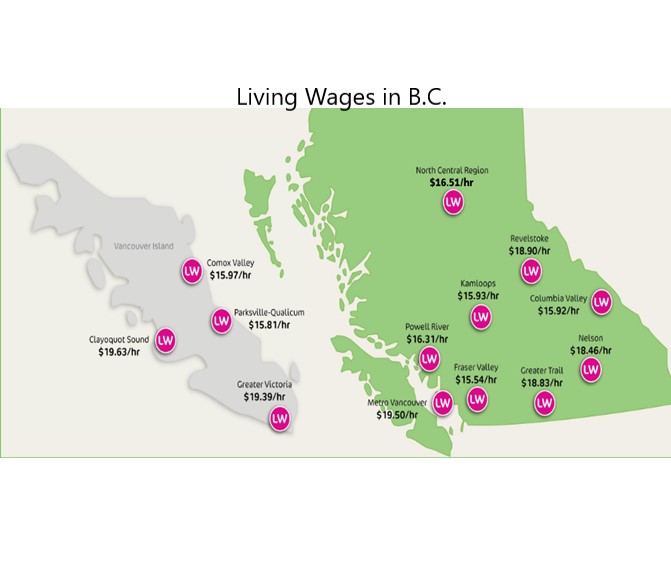 The minimum wage increase will help women and racialized workers who disproportionately work in low-wage sectors like the service and agricultural industries. Many of these low wage sectors were in the spotlight during the pandemic and it became clear how undervalued certain workers have been. As B.C. Federation of Labour (BCFED) President Laird Cronk stated, “Minimum wage workers, many working on the frontlines through COVID, make the profits for businesses and they deserve a dignified wage.”

Advocating for a living wage on behalf of all B.C. workers is the Living Wage for Families Campaign, a program that fights for equitable wages, encourages employers to pay a living wage and advocates for government policies that would help families make ends meet. Another initiative supporting living wages is the Fair Wages Commission which was established to advise the government on how to raise minimum wages with increases that are regular, measured, and predictable. To that end, the Fair Wages Commission has gathered input on closing the gap between living wages and the minimum wage in B.C. and is now compiling its report.

The Living Wages for Families Campaign calls on the government to execute the recommendations made by the Fair Wages Commission a call echoed by the BC Federation of Labour (BCFED) President Laird Cronk. The BCFED encourages the Fair Wages Commission to continue working with the government to develop plans to realize minimum wages that are living wages for all workers.

The Union has negotiated your right to be paid equitable wages which increase regularly, as per the current Collective Agreement and takes every bargaining opportunity to advance and maintain those rights. The Union believes in equitable wages for all British Columbians and support this belief by doing business with other organizations that share this view.

For example, the CEU has selected to bank with a financial institute that is certified as a Living Wage Employer that has implemented other sustainable practices. Also, to ensure your dues are invested ethically and responsibly, the Union hires a not-for-profit organization called S.H.A.R.E. to scrutinize Union investments ensuring they are invested in businesses that have ethical policies in place, such as paying a living wage to their employees and major contractors.

CEU President, Laura Snow, comments that the Union supports living wages for all B.C. workers and endorses campaigns and organizations with this goal in mind. The fight for a living wage aligns with the CEU’s values of Equity, Compassion, Respect, and Integrity and supports the view that paying living wages contributes to strong local economies, sustainable cities, and healthy neighbourhoods.

BC Federation of Labour

With a Passion for Enology, CEU Member Returns to Nova Scotian Roots